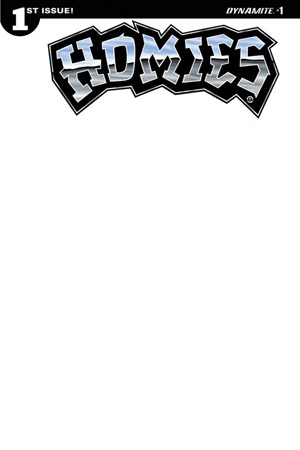 The Blank Authentix Edition - available only as a variant to the first issue of HOMIES - lets you have your favorite Homie adorn the cover of this book. In this issue, it's time to go back to the barr?o with the HOMIES! The surprise hit of the 90's is back in a brand-new comic book series co-plotted by original HOMIES creator David Gonzales and "Adventures of Grumpy Cat" writer Elliott Serrano, featuring all-new stories and never-before-seen characters. With art and covers by Andrew Huerta, HOMIES #1 features the long-awaited wedding of Hollywood and Gata. It's been a day that she has imagined for her entire life, but now Gata has to deal with everyone trying to ruin it! What will she do when she hears the whispers about Hollywood and his womanizing ways? Will the wedding still take place when everything that can go wrong actually does? Is Hollywood destined to be a bachelor for life, or will Gata finally get him to settle down?It's a day that will be full of love, laughs and heartbreak. But for who?