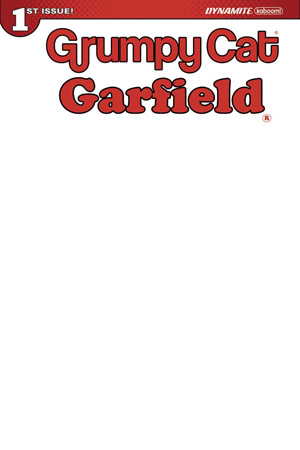 The Blank Authentix Edition - available only as a variant for the first issue of Grumpy Cat/Garfield #1 - features the same great story, but with a blank cover that you can get your favorite artist to draw! It's the inevitable meeting of the sourpusses! Garfield, the reigning cynical cat of newspapers and TV crosses paths with Grumpy Cat, the internet sensation whose scowl endeared herself to the world. Who's the most sarcastic? Well, he likes lasagna and not much else...and she doesn't even like lasagna. Can these two inhabit the same comic book mini-series, let alone the same planet? You'll find out in a trio of issues written by Mark Evanier and illustrated by Steve Uy. We'd say it's the cat's meow but neither of these cats meows.